All right… so this isn’t getting better since it’s   April 30 (wtf, seriously where does the time go?) Since I did not take my own advice and start a journal, here’s what I kind of remember from March.

In March, we successfully:

Things we learned in March:

That might be all we learned in March, it was a long time ago.  Maybe tomorrow I’ll write about April in review so it’s not so far off. And I’ll start keeping a journal so I remember may.  (Probably neither of those things will actually happen.)

So, let’s see.  Jack continues to grow. Learns to smile at you. Like he means it. Like I see you there Mama and I’m going to show you I think that’s cool by smiling at you.  It’s the best thing ever. Have I mentioned that?

Well… you may recall we had our first overnight away in February, this month we returned to the scene of the crime to house sit for my parents while they flew to Connecticut to meet my baby nieces. That same weekend, Johan and Max went diving so I was alone with the baby for the weekend for the first time while also being at somebody else’s house. It was really stellar planning on my part, don’t you think? It went shockingly well, in case you’re wondering.

Then it was our turn to fly up to meet the nieces. (Ok, if you want to get technical, just one niece, my brother welcomed a baby girl in November. But my bestest friend in the whole wide world also had a baby in September and as far as I’m concerned she’s my niece and if you have a problem with that I will fight you.) BUT, the nieces are not the point of the story. The dreaded plane ride.

Sorry to disappoint but I have nothing to tell… I was totally prepared to feed the baby the whole time we were in the flight and to give my “if looks could kill” stare to anyone that had a problem with a crying baby.. but it went great.  Our flight was delayed until after 11pm, so that probably helped. Jack was so tired, he barely even moved the whole time. Slept like a champ in the ring sling. On the return flight, he slept most of it and then pretty much just looked around.  So if you’re here looking for travel tips with an infant (and I don’t know why you would be) I have nothing for you. Sorry.  Bonus: Jack got to see his first snowstorm!

I realize this blog is a weak showing. I’ll try to do better for April. To make it up to you I added an extra picture of Jack from St. Patrick’s day. You’re welcome. 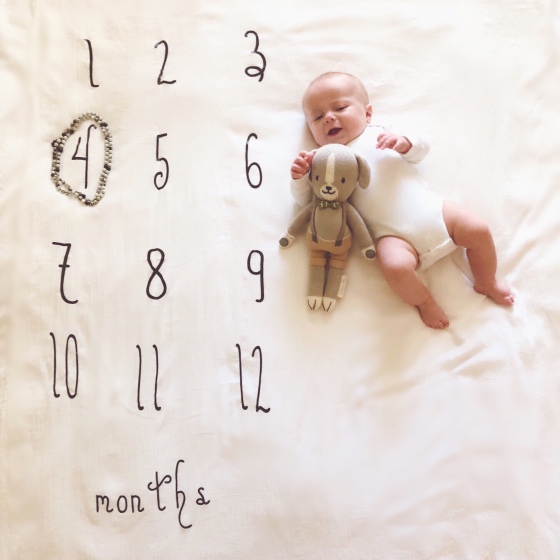 ps… I did not proof read this post.  good night.