Showing off the medals

Uh huh…. that’s me.  I did it.  I finished my first marathon and in my mind that officially makes me a marathoner.  At least for now.  Do I think I’ll do another one?  Probably.  Does that make me crazy?  Absolutely.  (Not as crazy as my twitter friend who also ran his first marathon at Disney this year and thinks he’ll “do one a year.” That would seriously cut into my drinking time.)  And as distance runner Frank Shorter says, “You have to forget your last marathon before you try another. Your mind can’t know what’s coming.”  You know why?  Running a marathon hurts.  “Oh. My. God. Ouch.” Were the words that Lance Armstrong texted to his ex-wife following his New York City Marathon.  I remember reading the article in Runner’s World years ago and thinking ‘Christ, if Lance Armstrong is in pain, I will NEVER do a a marathon.’  Hmm…  Never say never.

Since it seems that I sweated out all my brain cells during the run, I’m going to use some of the signs and t-shirts that I saw along the route to help me get some of my thoughts out on the marathon.

Thanks for asking, this marathon is 26.2 miles too.  Leading up to this event, I was in awe of the number of people who asked my how long “this” marathon was.  I thought this was common knowledge?  So here is a little insight.  A marathon is 26.2 miles.  Always.  The distance became standardized in 1921.  It is based on the fabled run of the Greek soldier Pheidippides, a messenger who ran from the Battle of Marathon to Athens.  He ran 26.2 miles to deliver the message “we have won.”  In case this doesn’t sound hard to you, Pheidippides died when he got there.  Just sayin.

My race pace plan?  Start slow and then back off… which is exactly what I did.  “I didn’t train all that time just to come here and get it over with as fast as I can.” John Bingham. Yeah, I’m not fast.

starting line of your first marathon.  There is also a sense that you may potentially vomit on your shoes from the nerves and anticipation of what you’ve gotten yourself into.  But the fact is when you line up to start a marathon, you’re doing something that most people never do.

“No marathon gets easier later. The half way point only marks the end of the beginning.”  It’s true.  Hearing you’re halfway there at mile 13.1 is only slightly encouraging at best.  You know the hardest part is still ahead.  You know you’re going to have to fight.  Hard.  You know in spite of the sweat and effort put in thus far, you’re still just starting to face the real challenge.  At the half way point, it’s time to dig in.

Pain is temporary.  Quitting is forever.  Oh this one stuck with me. When my knee got a little out of whack at mile 10 and the pain struck, this was the t-shirt I thought of.  When I hit the halfway point and put on my visor, realizing that the early morning sun that was getting in my eyes was quickly going to heat up the asphalt and make for a hot, hot journey for another 13.1 miles. I thought about this t-shirt.  When I hit mile 19 and and wanted to cry from the exhaustion, this was the t-shirt.  When I hit mile 24 and spectators were yelling “only two more miles” and I had to refrain from punching them in the face to remind them that when you’re running this fucking far, there is a HUGE difference between 2 more miles and 2.2 more miles.  Well, ok, that wasn’t the t-shirt.  That was really just lack of energy if I’m being honest.

Your feet hurt because you’re running 26.2 miles.  I loved this sign because it made me giggle every time I saw it.  It was a sweet, sweet reminder that I got myself into this mess and the only way out was through the finish line.  Oh and this one too. 26.2 – because 26.3 would be crazy.  Both of these signs could have and should have ended with ‘dumbass.’  Both of these signs could have just as easily said what I said to myself several times during the race.  “What were you thinking?”  “Only crazy people do this shit.”  Which is why I especially appreciate this gift from my best friend and tireless cheerleader, who flew from Connecticut for a weekend of no drinking and getting up at 3:30am, just to cheer me on. 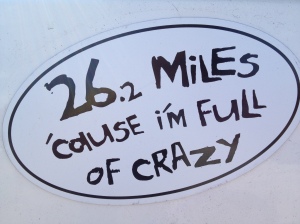 Chafe now, drink later.  What?  Don’t want to hear about that?  Chaffing is only the beginning of the bounty of gifts provided to you by the 26.2.  Runners bond over the damage done by running.  Muscle pain is obvious.  Chaffing is no longer limited to arms and thighs.  Nope, it’s shocking to learn where you can chafe once your distances get longer.  Losing toenails is always a crowd pleaser.  Common among men running long distance?  Bloody nipples. Yeah, you read that right. Ouch.  Runners go from acquaintances to family in the medical tents.  Nothing like stopping at mile 18 to shove some Vaseline your sports bra to prevent any more chaffing.  Or shoving your hands down your pants to put some Bio Freeze on your hamstrings. There is no time or place for modesty mid race.  Yup, we’re all in this together now.  Plus, everyone out there, no matter how fast or slow understands exactly what Jerome Drayton means when he says “To describe the agony of a marathon to someone who’s never run it is like trying to explain color to someone who was born blind.”  Me personally,  I made out pretty lucky, but I do wonder how stuff happens.  Like when I went to scratch my back and realized I’ve chaffed all along the back of my bra line.  Or, now that the swelling has gone down, I see that I have bruising on the tops of my feet.  Seriously, how does that happen?

Way to go TOTAL STRANGER.  You rock!  I wish I could have hugged the guy who had this sign at mile 23. I

was pretty sweaty so I’m not sure he would have appreciated the gesture.  But that’s only because he doesn’t realize it’s not sweat, it’s liquid awesome. When you feel like every muscle in your body is ready to give up and you wonder how you could possibly finish, there’s nothing like a good laugh to remind you that you’re going to make it.  Cause sometimes, several hours into a race, we forget running takes balls, other sports just play with them.  Along the route there are spectators out there to support runners.  Like I said, my friend Sharon was there for me and like most of the spectators, she was cheering for each runner as they went by.  Crowd support was crucial for me and for some reason, that sign just made me laugh.  And man did I need a laugh at that point.

It’s not a miracle that I finished this race.  I’ve been training for it for half a year.  The miracle isn’t that I finished, the miracle is that I had the courage to start.  The estimate is that in any given year, approximately 0.1% of American runs a marathon.  That means I’m a bigger bad ass than 99.9% of the nation.  Cool.

2 thoughts on “Being a Marathoner”